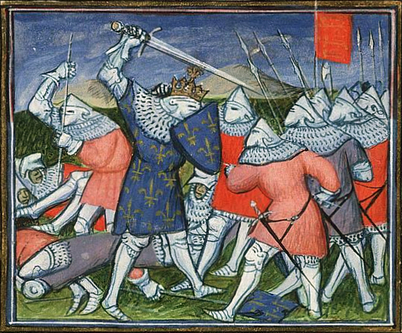 War of the Trillium
Armoured Combat Schedule
All battles will have points awarded for side with the most participants
Will you side with the Spanish or the English(and Dutch, Scottish, or just not Spanish)
Click on the schedule to see larger version. 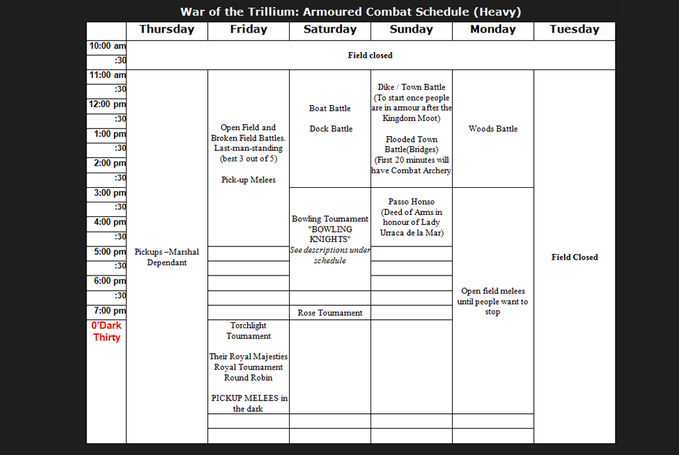 Boat Battle - Fight a boat battle as the Spaniards try to make it to the docks.  Yes, there will be boat-like structures for this scenario.  Last-man-standing

Dock Battle - The Spaniards have made it to the docks.  Now you have to fight it out as they try to come ashore. There will be 2 boats at the dock and the Spaniards will fight to come off the boats onto the dock and then on onto the shore. Stepping into the water or bracing your weight in the water will constitute death. You are on a dock or boat and falling in the water would be unwise in armour. ;-)  Last-man-standing.

Bowling Tournament - Team of Three unbelted fighters will bowl at 6 bowling pins. Those 6 pins represent Members of the Chivalry. Fail to get a strike and you must fight the remaining pins" to try and pick up your spare. Yes, this means if you get a strike you get 6 points and get a "bye."  If you getter a gutter ball you must fight against 6 Chivalry. The pins will be decorated to represent each member of the Chivalry.

A great chance to work on 3-man melee tactics!

Rose Tournament - Come and watch as teams sponsored by Ladies of the Order of the Rose, consisting of 2 Unbelted Fighters and one Fencer, vie to advance the favours of their Rose through feats of prowess and chivalry.

Dike / Town Battle – The field will be divided up by dikes (marked by construction paint and hay bales) with gaps to pass through for troop movement (marked by hay bales). The dikes will vary in width between 4ft wide and 9ft wide.

Fighting may be done through the gaps, in the open spaces, and over the hay bales.  No standing on the hay bales. Best 2 out of 3.  Last-man-standing

Combat archery will be allowed in the 2nd battle.

Flooded Town Battle - The town has been flooded and now you have to fight on top of the dikes you were once fighting over.

The chivalry may walk, but not run, in the water areas so long as they are within 6 feet of the dike walls as if they are on horseback.  The goal is to keep the Spanish from getting through to the gate into the town. If they make it to the gate then it is a last stand to defend the town from the invading Spanish forces.

Resurrection for 20 minutes then to the last man.

Combat archery will be allowed in the first 20 minutes.

Passo Honso - Lord Fulk Beauxarmes will be hosting a Deed of Arms in honour of his Lady and will stand at a Bridge with a group to take on all challengers.  This is open to any and all no matter what time period you portray or what type of armour you wear.

Imagine a bear-pit with pageantry and you get the idea.  See Lord Fulk Beauxarmes for more details.

Woods Battle – Best of 2 out of 3.  Resurrection for 20 minutes and then to the last man.
Minimum of 10 minutes between each battle